The magic formula of the Singapore GP 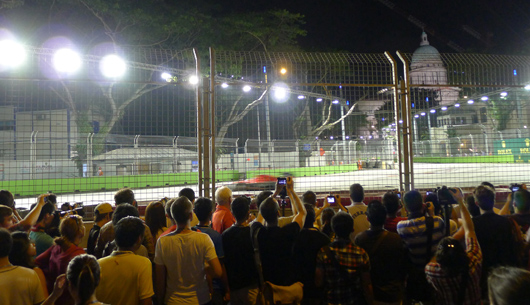 Sports reporter Deepanraj Ganesan seeks to discover the appeal of the F1 race in Singapore.

Every year in September, Marina Bay is lit up by the glamorous Formula 1 race that attracts many tourists and creates a party atmosphere. I’ve always wondered, what makes people so excited about fast cars running round and round a circuit? After all, the cars are gone in a flash, and Singaporeans’ favoured sport has always been football.

On September 22, during the sixth edition of the Singapore Grand Prix night race, I set out to answer this burning question. Armed with my ticket, earplugs and map, I made my way towards the entrance of Zone 4 of the Marina Bay Street Circuit for my first experience at an F1 race.

The minute I entered Zone 4, I felt like I had been transported to a truly cosmopolitan area as I was surrounded by people of various nationalities. I quickly made my way to the viewing gallery, just in time to watch the traditional drivers’ track parade. Top drivers such as Sebastian Vettel, Lewis Hamilton and Fernando Alonso sat in vintage cars, waving at the adoring crowd. I waved back, especially at my personal favourite Kimi Raikkonen, imagining he could see me.

One excited member of the crowd waving next to me was 35-year-old Filipino Carl Bimla. The engineer had been to the Sepang circuit twice but decided to try Singapore this year. “It is so different to see the cars under the glaring rights, gives me a different feel,” he said.

When the race started, people started looking for even an inch of space to catch the action live. Fathers carried sons on their shoulders while others climbed trees and poles to get a good view. Even the restricted views could not deter fans like Mr Bimla, who said he wanted to return.

When the fans tired of craning their necks, they explored the grounds, stopping at the many booths that sold F1 merchandise, food and beer. The two booths that caught my attention offered complimentary airbrush tattoos and the official F1 driving simulator. Being a huge F1 fan, I decided to try out the simulator. “Just like arcade Daytona,” I thought as I quickly glanced at the various controls. That was the understatement of the night. During my two laps around the simulated Marina Bay circuit, I lost count of the number of times I crashed. I felt a heightened appreciation for the drivers’ skills.

Meanwhile, the real race happening on the track reached its climax after more than two hours, with Red Bull’s Sebastian Vettel prevailing over his rivals. To my pleasant surprise, fireworks immediately erupted over the skyline. When they ended, I was swept up in the crowd heading en masse towards the Padang for an electrifying concert by Rihanna. It was then that I fully understood what the F1 in Singapore is all about – more than just about 20 cars zooming past, it’s a huge, multi-national celebration of people and music. Which is why there’s no other race like it.