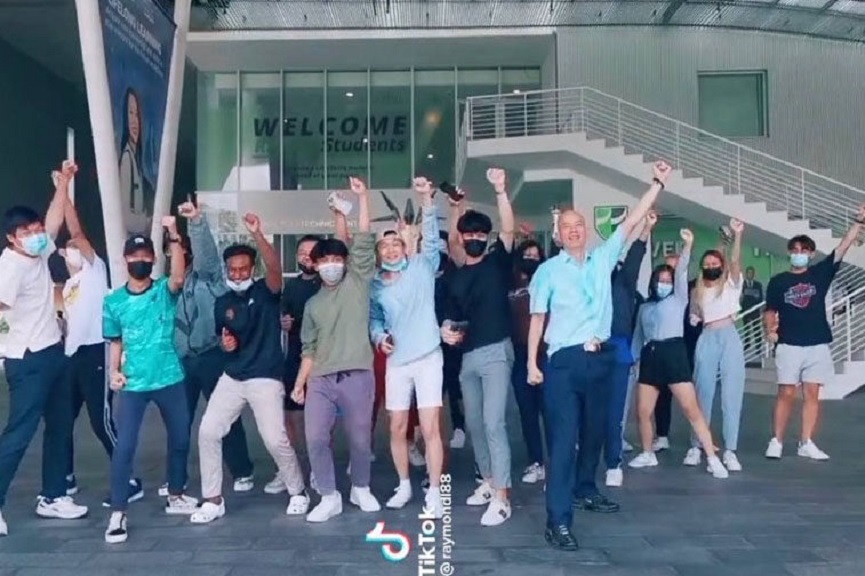 Republic Polytechnic students finally have their turn to dance along with the friendly neighborhood Uncle Raymond.

Uncle Raymond, one of Singapore’s most beloved TikTok sensations, visited Republic Polytechnic on Apr 25 and filmed nine TikTok videos of his signature dance with several students.

Uncle Raymond spent around three hours on campus talking to students and getting to know them better. He took pictures and shared laughs with all of them. The students also reciprocated the positive energy and ensured it was good vibes all around.

Antonio Angelo, a year 2 Customer Experience Management with Business student, who participated in the dance said: “He was fun to be around. You could tell that he was a genuine person who wanted to spread happiness around Singapore, and he was not just doing this for the fame. When my friends and I found out he was at Republic Polytechnic, we rushed to go see him.”

“If given a chance we would like him back here in Republic Polytechnic again, even create a dance of our own together! He is like our own little superstar in Singapore, and I hope he achieves greater things,” added Antonio.

Uncle Raymond burst to stardom after his TikTok videos went viral. He uploaded his first TikTok in March 2020. However, this was before he had his popular trademark dance and went full-fledge into making TikToks.

After almost two years of creating mundane videos, the Uncle Raymond dance was born in February 2022. Originally a short video of him dancing to a manyao (Chinese EDM remix) cover of Faye Wong’s A Thousand Years of Solitude, it started to go viral.

Since then, “Uncle Raymond Fever” began spreading across Singapore, in particular amongst TikTok users. His motto, “Be Happy”, and his cheerful and sincere dance began to strike a chord amongst youths.

Uncle Raymond has also filmed his dance with Singapore’s sportsmen and women and even managed to get Minister Ong Ye Kung to participate in his little dance with him.