Who says nothing is for free? 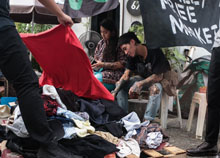 In contemporary Singapore, day-to-day living can potentially cost a small fortune for the everyday folks. Getting anything for free often seems like a far-fetched dream, but not for the organisers of the Singapore Really Really Free Market.

In a wide alley next to a seemingly dilapidated art studio called Independent Archives at Aliwal Street, stacks of crates sat next to sheets of mats with a pile of items scattered across. A canopy umbrella was pitched to shield the items from passing showers. It was almost like a typical scene at a flea market, except nobody had to pay for the displayed items. They could simply take them.

The event has its roots in the Really Really Free Market movement that originated in the United States in 2003, during the anti-globalization protests against the Free Trade Area Agreement (FTAA).

The movement aimed to foster habits such as sharing resources, as well as recycling goods and services such as food, clothing and free haircuts.

The annual event first landed on our shores in January 2009.

“Abolish the idea of money and everything will be alright,” said Hilfi, a former School of Technology for the Arts student. Hilfi had organised a similar event during his polytechnic days called Food Not GST – a local take on the increasingly popular movement Food Not Bombs, where activists share free vegetarian food with hungry people. He and a few others bought food with their own pocket money and then gave it away to random people on the streets, like the cardboard-collecting elderly.

At the SRRFM, donated items included used clothes, a box of CD albums from pop to punk, art books and even an unused set of guitar strings.

Most of the people who turned up got their news from social media. Mary Ernest Rajah, 26, a body piercer, came to know of this event through Facebook and tagged her boyfriend and a couple of her friends.

According to Rahmat, nothing in this event will go to waste. “Leftovers will be donated to orphanages or other organisations that will require the items.”