World Cup 2014: Team of the Tournament 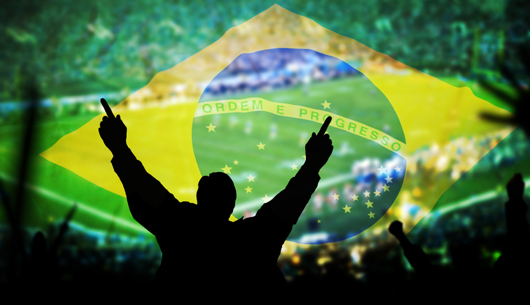 Some of the best footballers on the planet took to the field in Brazil and they did not disappoint, making the 2014 tournament one to remember for the ages. But who left the audience gasping for air with their magical left peg or who made it seem like they had 10 other clones on the pitch? DEEPANRAJ GANESAN picks out the 11 men who make The Republican Post’s Team of the Tournament.

Keylor who? That was perhaps the thought on most minds going into the tournament but with 21 stupendous saves made by the Costa Rican, Keylor Navas proved to be the hero for his nation. Grouped together with former world champions Italy, Uruguay and England, it seemed like Costa Rica were there merely to make up the numbers. But with Navas, who plies his trade in La Liga with Levante, being such a revelation, Costa Rica conceded just one goal in the group stages and that too, was through a penalty. Costa Rica’s heart-warming run in the World Cup came to an end when they were knocked out in a penalty shoot-out by Holland in the quarter-finals, but if Navas’ performances are anything to go by, then we will be seeing more of him in a top European league very soon.

Tipped to be the great hope for African football at the tournament, the Elephants flattered to deceive as they bowed out of the tournament in the group stages. However, where illustrious players like Yaya Toure and Didier Drogba failed, Ivory Coast’s right back Serge Aurier flourished. The Toulouse player was much talked about prior to the tournament and all eyes were on him in Ivory Coast’s first match of the World Cup against Japan. Aurier’s pin-point delivery stood out as he laid on two brilliant crosses to steer his side to victory. In subsequent matches, Aurier’s defensive strengths also came to the fore despite his side’s premature exit from the tournament.

Going into the tournament, one or two eyebrows were raised at Jose Pekerman’s decision to select 38-year-old Mario Yepes in the World Cup squad after the veteran’s torrid season in Serie A with Atalanta. In a World Cup predicted to be played at a frantic pace, it was feared that Yepes would lose out. Football, however, is not a game of sprint as attackers were to find out. The Colombian captain was a rock at the heart of the defence for the South American side which won the hearts of many. Countless solid performances led to many looking up and taking note that age is just a number when it comes to football.

It is fair to say that Aston Villa were a defensive disaster in the English Premier League last season. Conceding 60 goals, the backline came in for a whole lot of abuse from the Villa Park faithful as the Villans were embroiled in a relegation dogfight. It is a massive surprise then that Aston Villa’s defensive leader Ron Vlaar features in the team of the tournament. Playing like a totally different player at the tournament, Vlaar led the Dutch to a third-place finish. Marshalling an inexperienced backline, the 29-year-old was a key figure in Louis Van Gaal’s squad. Aston Villa fans will be hoping that the defender returns to his club side in the same form he was in at the World Cup.

Rounding out the unheralded back four is another player who was a virtual unknown before the World Cup. Word was that Marcos Rojo was not a popular choice amongst the Argentinians when the squad was announced due to his ineffective displays during qualifications and some pre-World Cup warm up matches. But the Sporting Lisbon left back shone with his hard tackling as well as his eagerness to bomb forward, a necessary trait for a modern fullback. Rojo was also an integral reason why Argentina only conceded three goals en route to the World Cup final.

If there was anyone who was in the form of his life in Brazil, then it was surely Germany’s Toni Kroos. Whilst most of the attention was centred on Thomas Muller and record breaker Miroslav Klose, it is Kroos who ended up as Die Mannschaft‘s standout player.  Providing tantalising ammunition for the forwards to feast on, Kroos finished the tournament with three assists and two goals to his name. In a glamorous midfield containing the likes of Mesut Ozil and Bastian Schweinsteiger, Kroos’ industry stood out throughout the tournament. Real Madrid are primed to sign Kroos in the weeks to come and with his displays in the World Cup, it could prove to be a major coup for the reigning Champions League holders.

Immense. That is the only way you could describe Javier Mascherano at this World Cup. The Argentinian midfield enforcer pulled out his defensive artillery as he screened the back four and provided the much needed link between defence and attack. Just as sublime goals are repeated over and over again for decades, Mascherano’s last-ditch tackle on The Netherlands’ Arjen Robben in extra time of their semi-final clash is one for the archives. Mascherano takes my vote for the Player of the Tournament. Messi might have driven Argentina to the final in Brazil but it was Mascherano who had been in charge of the clutch all the while.

Weeks before the tournament, the Germans were hit with a major blow with the news that Marco Reus would miss the finals with an injury. It was expected that the eventual World Cup winners would miss the mercurial winger but up stepped Andre Schurrle as he proved time and again to be the team’s hero at the World Cup. Against Algeria in the round of 16 clash, it seemed the Africans had an answer to everything the Germans threw at them till the introduction of the German maverick. Schurrle finished the tournament with three goals but his most telling contribution came when it mattered most – in the final. A superb cross from Schurrle allowed Mario Gotze to score the winning goal and clinch the most coveted trophy in world football. Gary Lineker, the English football legend, once famously said: “Football is a simple game. Twenty-two men chase a ball for 90 minutes and at the end, the Germans always win.” With the way he has changed matches in Brazil, Schurrle is the perfect epitome of Lineker’s words.

A one-man theatre, Arjen Robben produced a grand show in Brazil. From the get go, Robben was determined to slay the demons of the 2010 FIFA World Cup Final where he missed a sitter with Holland and Spain still battling it out at 0-0. Slay the demons he did as he ran riot against the defending champions, helping the Dutch to an emphatic 5-1 victory. Robben’s pace and trickery had been a constant threat throughout the tournament and defenders had no answers to the questions posed by his twinkle toes. The Bayern Munich winger has his detractors who criticise him for his eagerness to hit the ground at the slightest bit of contact but his artistry with the ball is a sight to behold. Robin van Persie could have stolen the show with his leaping header against Spain but there can only be one Flying Dutchman and none soared higher than Robben.

Strikers, look away. In a tournament full of goals, it is somewhat a surprise that the Golden Boot winner is a midfielder by trade. James Rodriguez’s haul of six goals saw the Colombian youngster bag the top award and, at the same time, put strikers to shame. The Monaco midfielder was more than goals as he brought his party of tricks and flicks to the fore in Brazil. Colombia fascinated many on the road to the quarter-finals and it was Rodriguez who stood out the most. His defining moment came in the round of 16 as he deftly chested the ball before firing a rocket-like shot into the net to send Colombians into raptures. A star was born in Brazil and at the young age of 23, it’s only just begun.

A team of the tournament just would not be complete without the inclusion of the magician, Lionel Messi. Although there were many who criticised FIFA’s decision to award Messi with the Golden Ball (an award given to the best player of the tournament), few can argue against the fact that the little Argentine single-handedly dragged his side through the group stages. Individual efforts against Iran, Nigeria and Bosnia gave the world a timely reminder that Messi was more extra-terrestrial than human. He may not have put an end to the debate of who is the better player between Maradona and himself with Argentina’s failure to win the World Cup but one thing is for sure – it is a privilege to watch the messiah that is Messi.

When AS Roma’s Dutch midfielder Kevin Strootman was ruled out of the World Cup, almost everyone immediately buried the Netherlands’ chances this summer. But what the critics didn’t know was that the Dutch have an even stronger weapon in the name of Louis van Gaal.

For every top performer in Brazil, there was a colossal flop.

Much was made about his impending departure to Manchester United after the World Cup, and what kind of impact it would have on a famously divisive Dutch national team. But not only did van Gaal keep the camp in high spirits throughout the month-long tournament, but he also gave a masterclass in tactical adaptability and innovation.

Without Strootman, van Gaal had no choice but to overhaul the team’s system while sticking to his preferred three-man central midfield, shifting to a 3-5-2 formation where star winger Arjen Robben took on a central role. One of the revelations of the tournament, Daley Blind, was originally a defensive midfielder but van Gaal deployed him as a left wing-back, and it proved to be a successful move. Attacking utility man Dirk Kuyt was also persuaded to take up a similar role.

Bringing along a young and inexperienced side containing little-known players like Georginio Wijnaldum, Daryl Janmaat and Jasper Cillessen, the Dutch were the only team to have utilised every single member of their 23-man squad.

Van Gaal produced the tournament’s premier moment of ingenuity when he replaced goalkeeper Cillessen for Tim Krul just moments before the penalty shootout in the quarter-final with Costa Rica. The result? He got it right.