The death of Singapore’s founding father and first prime minister, Mr Lee Kuan Yew, has unleashed an outpouring of grief from Singaporeans from all walks of life. We look at how local youths are commemorating the man who is largely responsible for the Singapore they live in today. 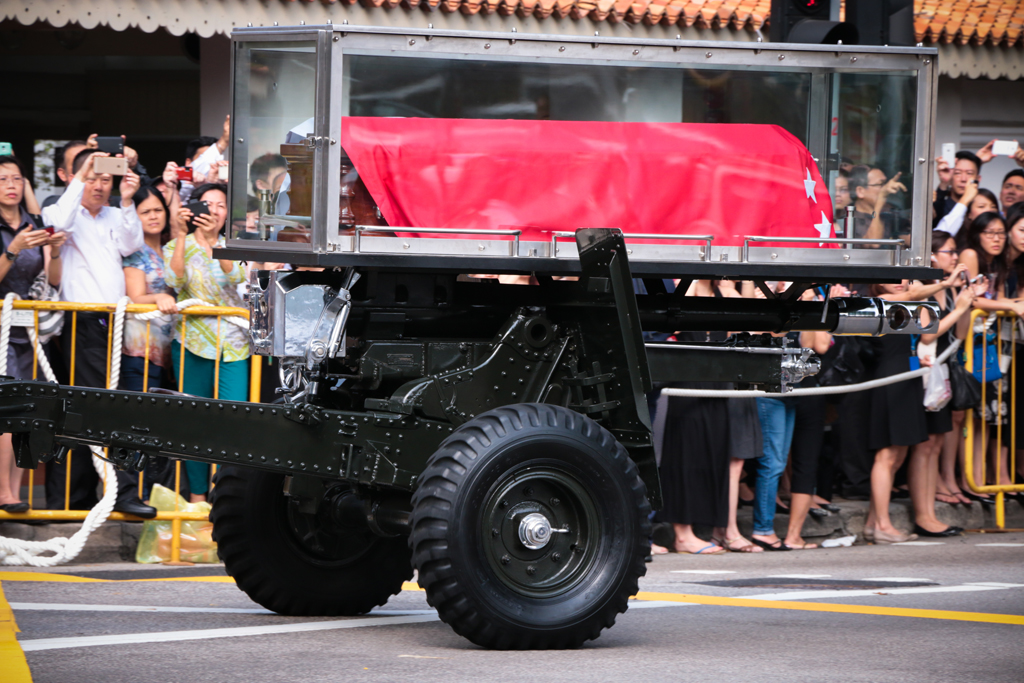 THANK YOU MR LEE: Crowds cheer with words of gratitude as the hearse carrying Mr Lee Kuan Yew’s body takes a slow turn into North Bridge Road on its way to Parliament House from the Istana on Wednesday. (Photo: Azmi Athni) 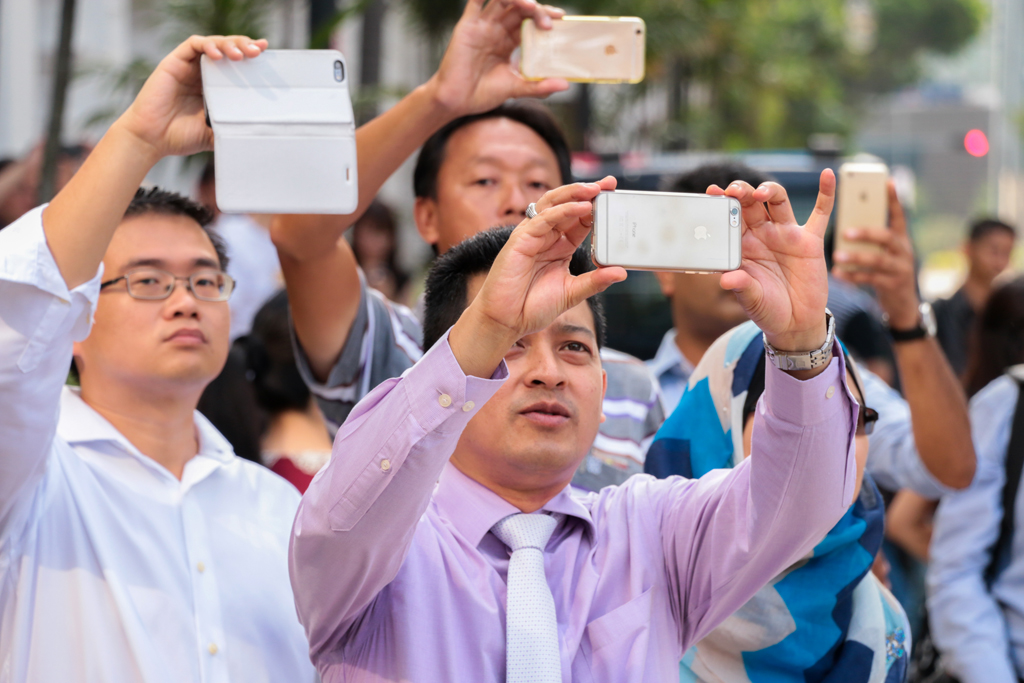 ONE LAST GLIMPSE: The crowds lining the route from the Istana to Parliament House eagerly take photos of their last glimpse of Singapore’s founding father. (Photo: Azmi Athni) 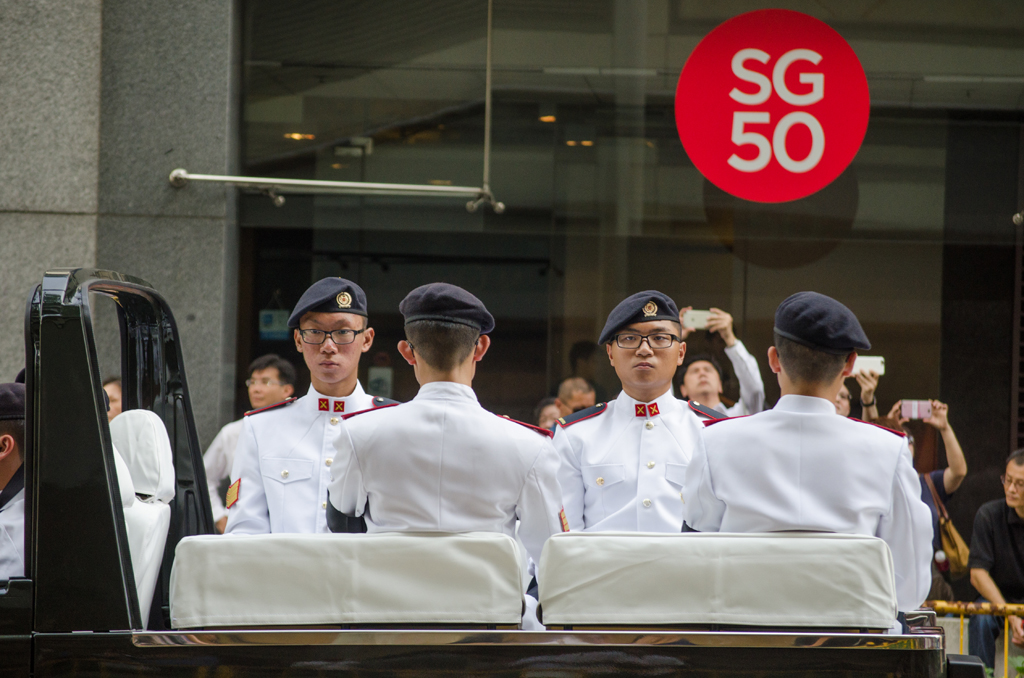 POIGNANT REMINDER: The motorcade of officers accompanying Mr Lee’s hearse passes by a SG50 logo. Singapore celebrates its 50th year of independence this year, made all the more poignant by the loss of the man responsible for much of modern Singapore. (Photo: Marcus Tan) 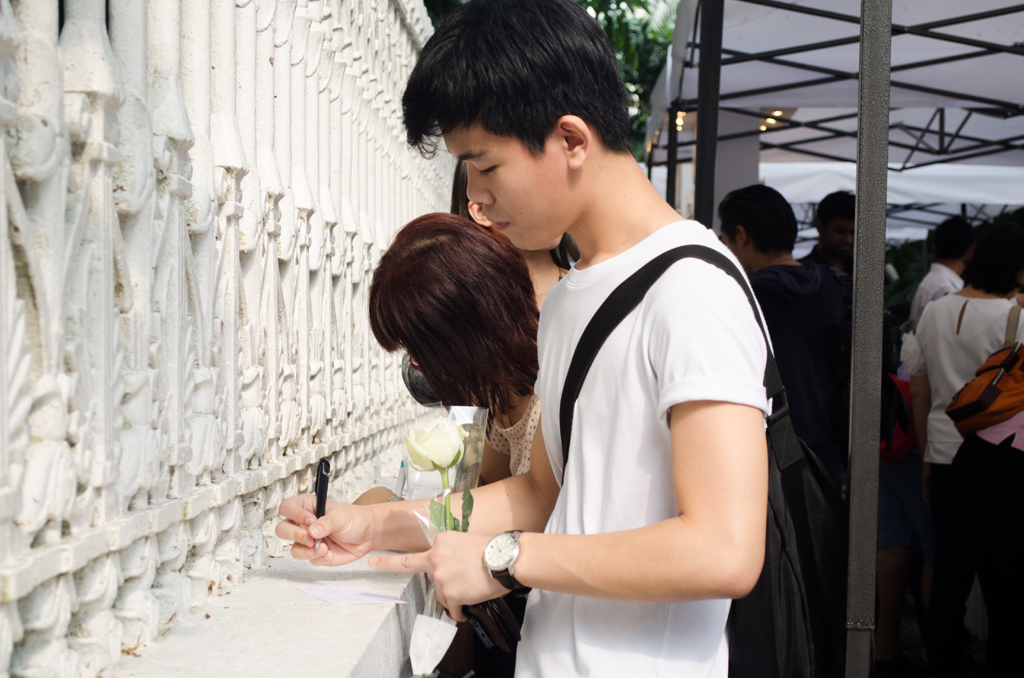 FATHER FIGURE: Ee Soong, 18, a student at Ngee Ann Polytechnic, looks up to Mr Lee as a father figure and the best in his game. “Without him, there will surely be no Singapore,” Soong adds. Soong is one of the many Singaporean youths streaming into the Istana to pay tribute to Mr Lee. (Photo: Marcus Tan) 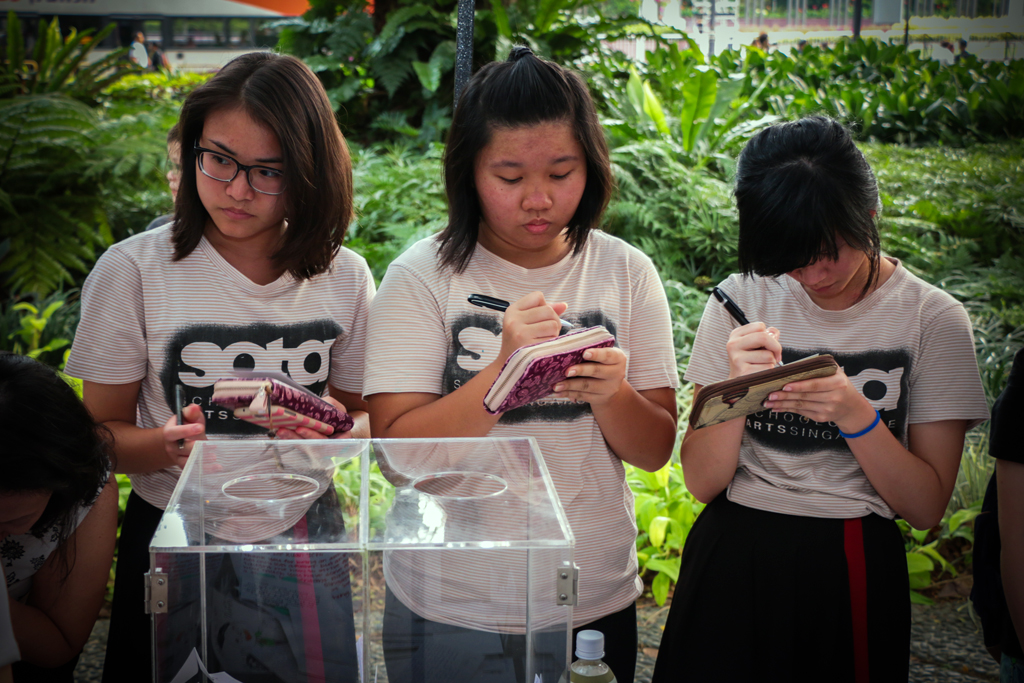 PENNING THEIR THOUGHTS: Students from Singapore School of the Arts pen their words of gratitude to Mr Lee outside the Istana. (Photo: Azmi Athni) 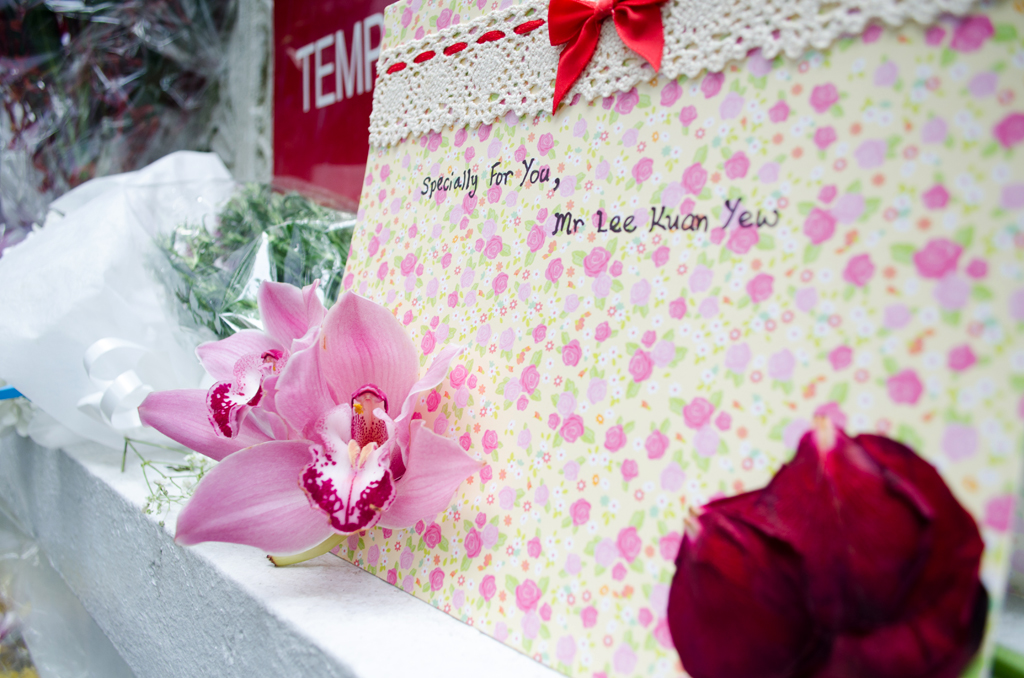 SYMBOL OF THE NATION: Orchids, Singapore’s national flower, are attached to a letter dedicated to Mr Lee, left outside the Istana. The Aranda Lee Kuan Yew orchid, a hybrid between the native orchid and the Vanda series, has been specially bred by the National Parks Board in honour of Mr Lee. (Photo: Marcus Tan) 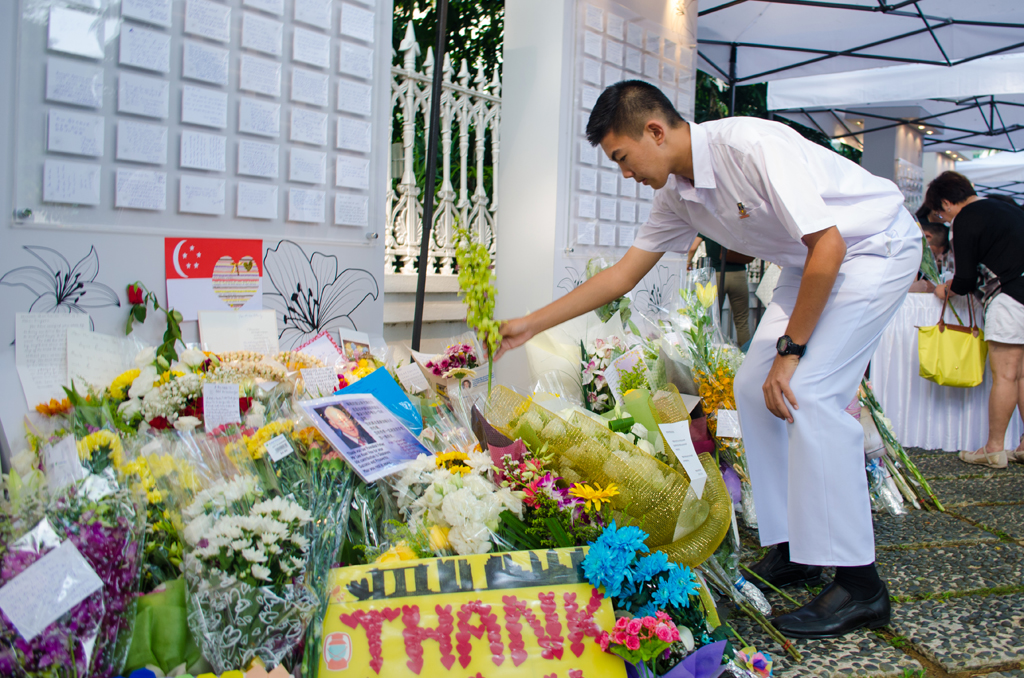 FROM ONE GENERATION TO ANOTHER: For Darius Oon, 16, a student at St Andrews Secondary, it was “greatly depressing” for him to accept Mr Lee’s passing. He wants to pass on his knowledge of Mr Lee’s achievemens to the next generation. ”I will tell them (the next generation) that the reason they are here, is because of Mr Lee Kuan Yew,” said Darius. (Photo: Marcus Tan) 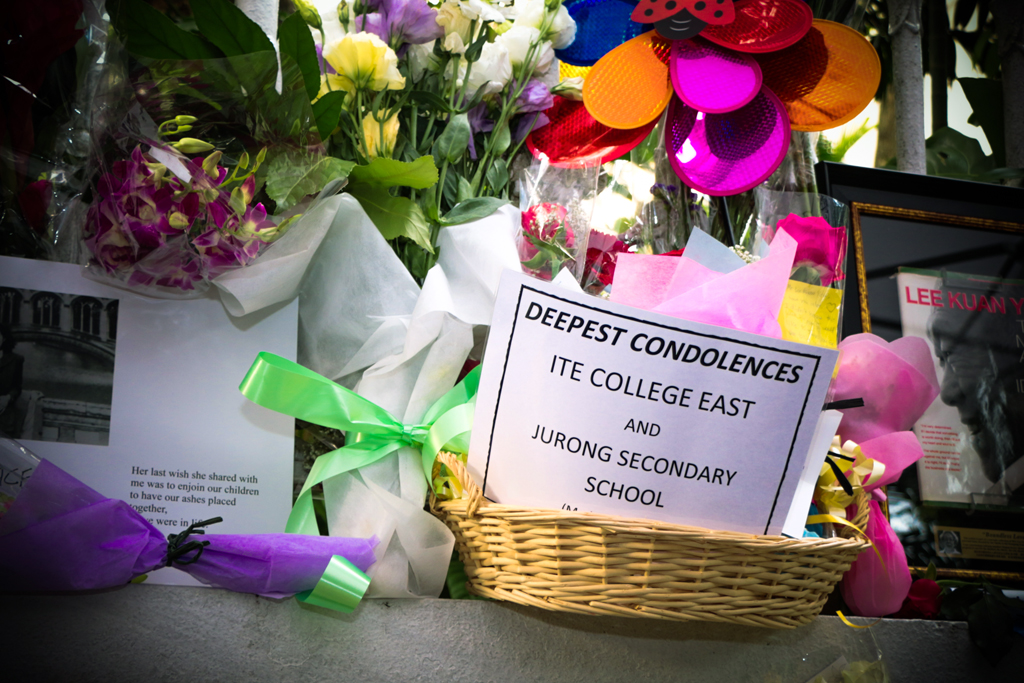 UNITED IN GRIEF: Students and teachers from ITE College East and Jurong Secondary School joined together to present their bouquet of flowers for Mr Lee at the Istana. (Photo: Azmi Athni) 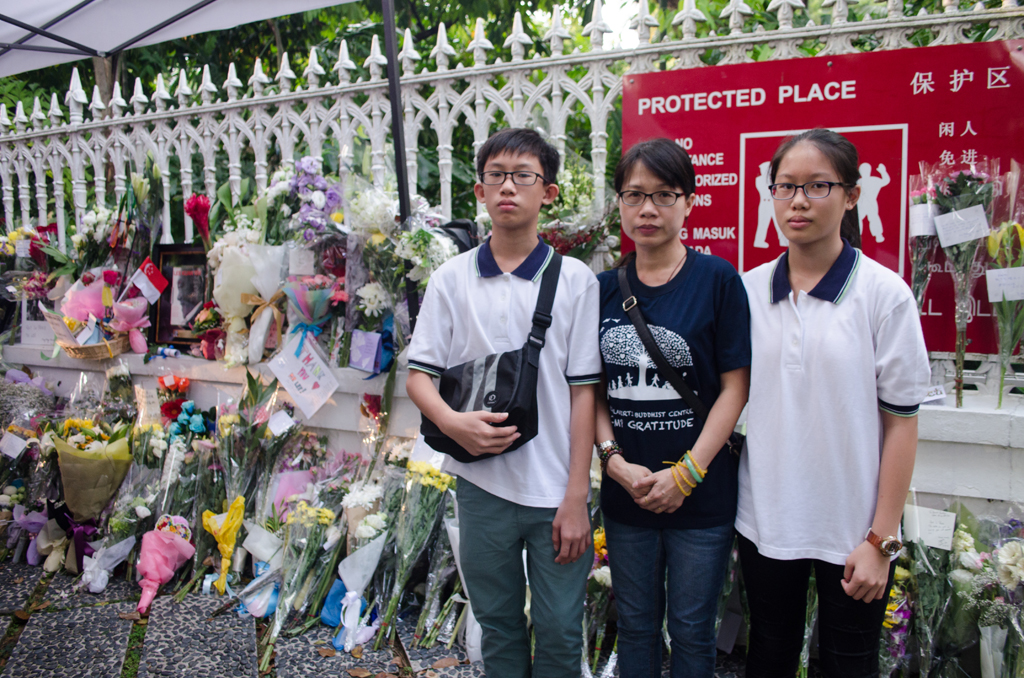 A LESSON FOR ALL: (From left) Ming Yang, Jean Er and Wei Lin stand in front of a row of gifts left by the mourning visitors. Jean wanted to teach her children something about Mr Lee, so she decided to bring both of them down to the Istana on Tuesday, where Mr Lee lay inside during a private wake. The trio wrote condolence cards and left a bunch of flowers. (Photo: Marcus Tan) 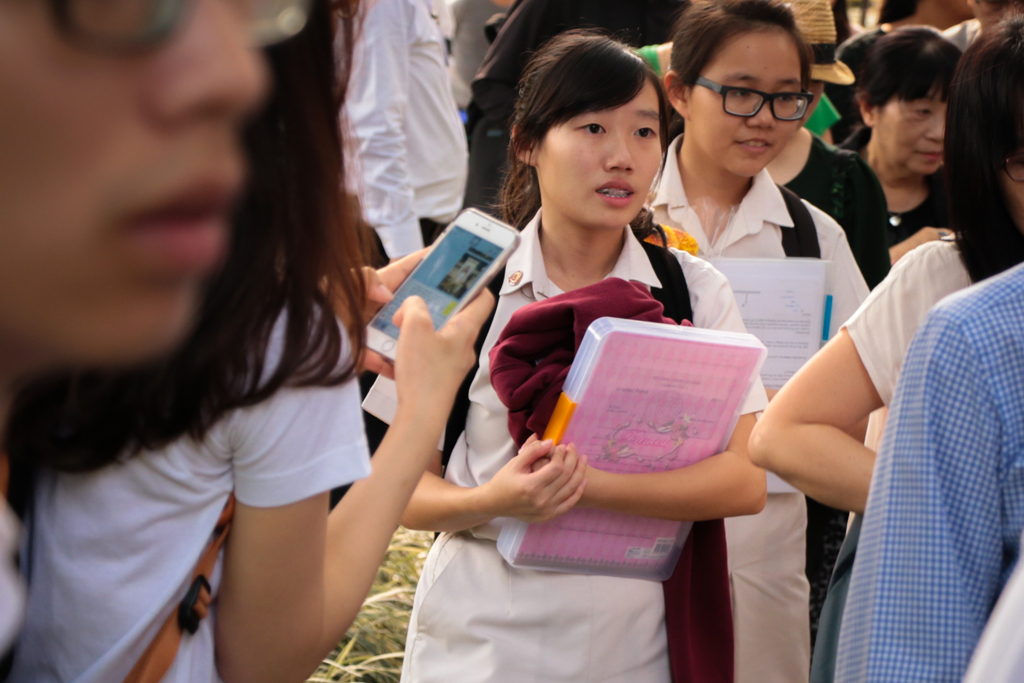 WISE WORDS TO LIVE BY: Victoria Junior College students Jasmine Teo Jia Min (left) and Soon Sze Jia, both 18, were among the many students who dropped by the Istana. Jasmine believes that she should strive to do well in her studies because the late Mr Lee kept emphasizing on the importance of education. This is one way, as youths, to remember his legacy. (Photo: Azmi Athni) 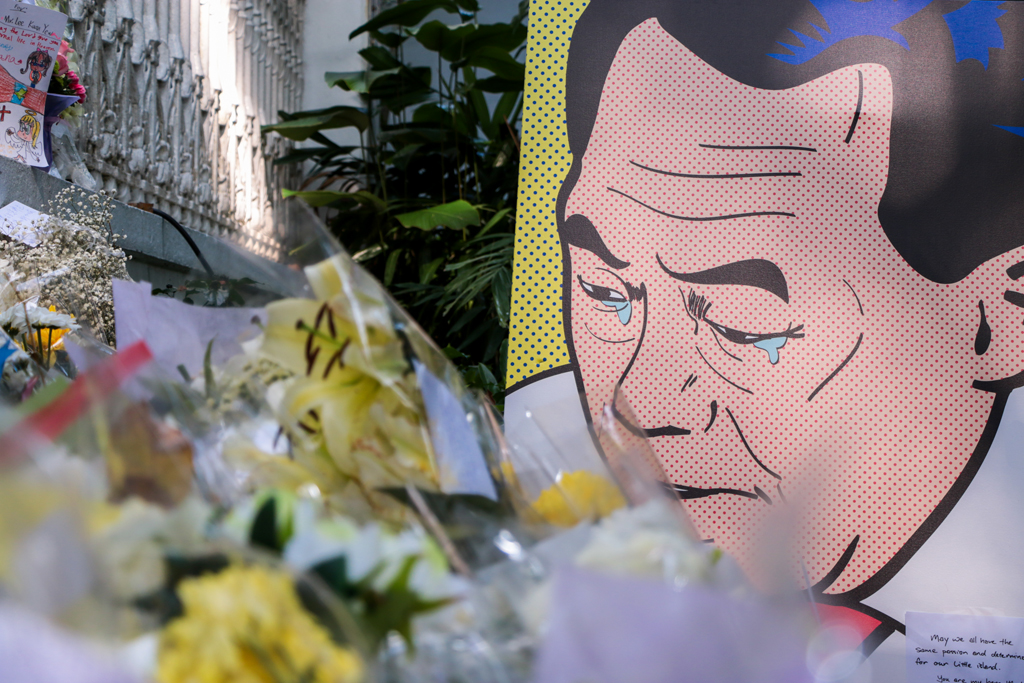 FROZEN IN TIME: Among the flowers and gifts left behind by visitors is an illustration of the late former Prime Minister. He may be physically gone but his spirit will live on in the legacy he leaves behind. (Photo: Azmi Athni) 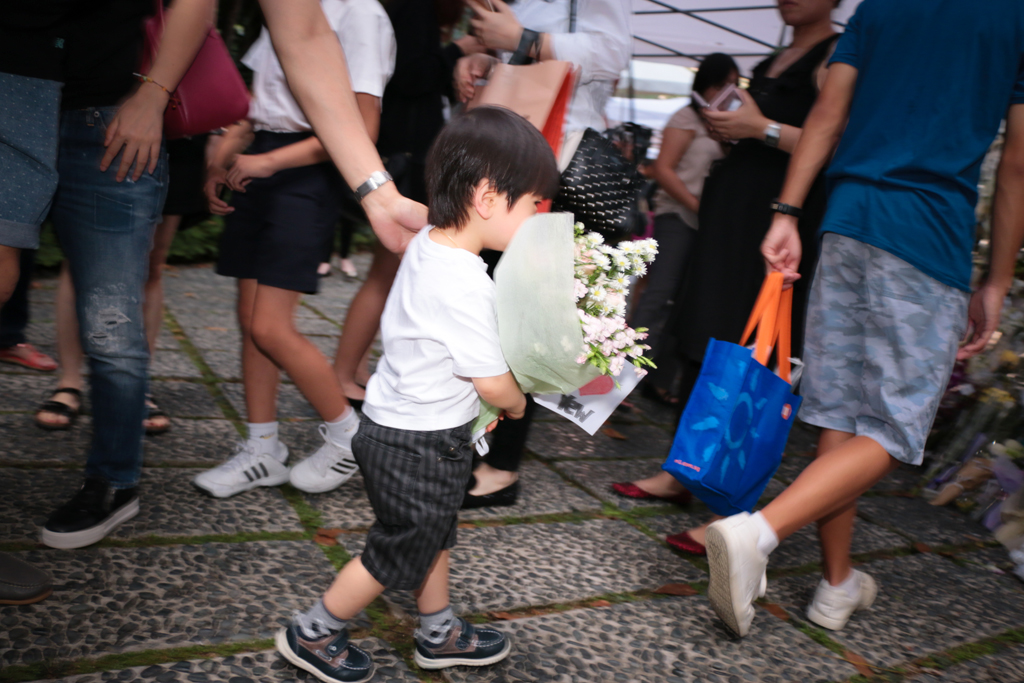 SIZE DOES NOT MATTER: A boy holds a bouquet as he stands with the adults, waiting for his turn to pay his last respects to Mr Lee at the Istana. (Photo: Azmi Athni) 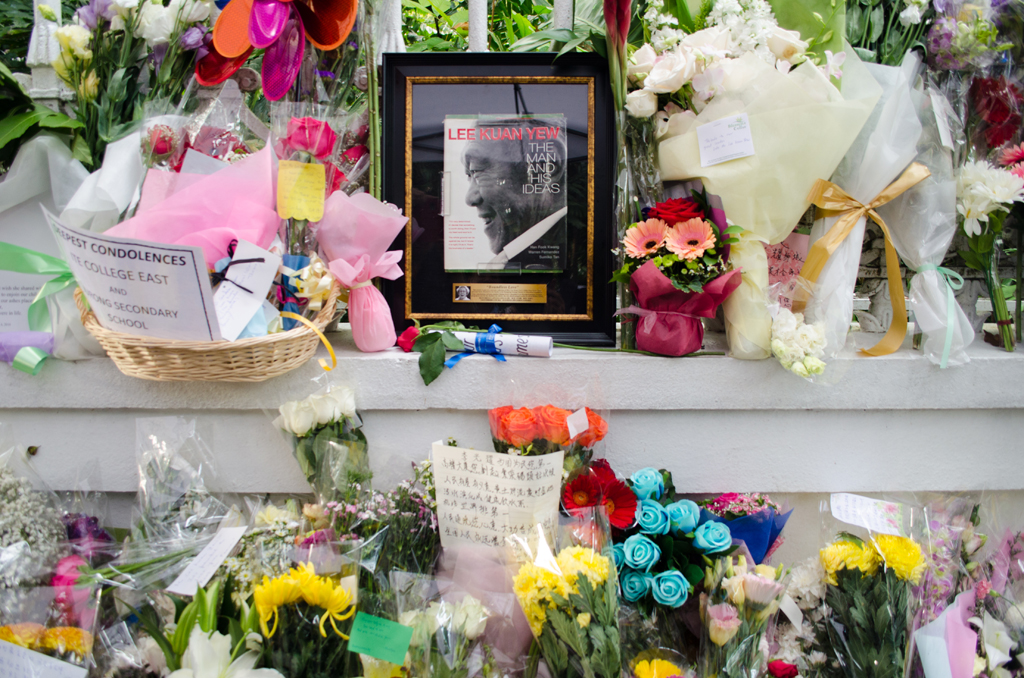 IN SO MANY WAYS: Singaporeans gathered at various tribute centres around the island to pay their respects to Mr Lee. They brought flowers, boards, drawings, personal items and their memories. (Photo: Marcus Tan)

WAITING IN LINE: The queues to the Parliament House to pay last respects to Mr Lee stretched for many kilometres as people braved the heat. (Photo: Marcus Tan) 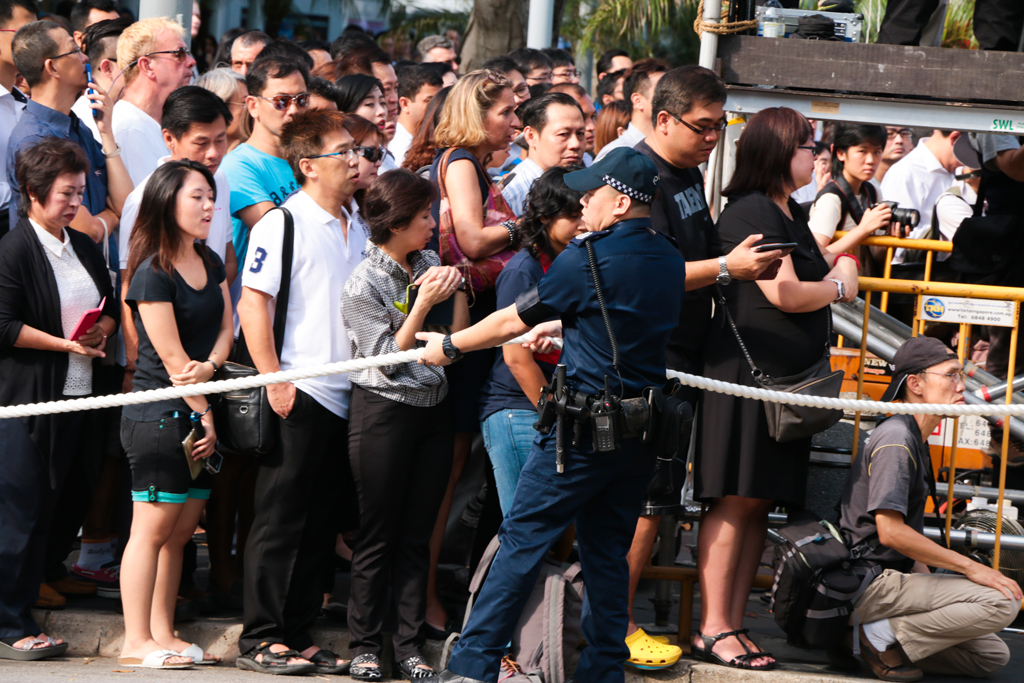 ROPED IN: A CISCO officer blocks off openings not secured with safety barriers with thick ropes to prevent crowds from running out to the middle of the road, at the junction of Bras Basah Road and North Bridge Road. (Photo: Azmi Athni) 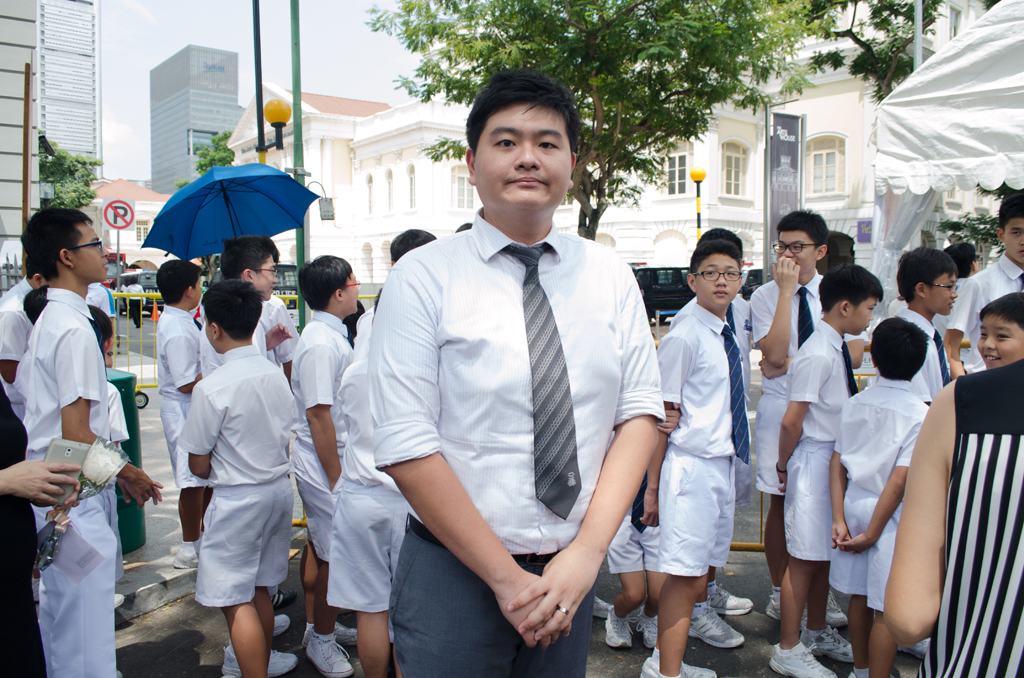 LEGACY OF RESILIENCE: Mr Alvin Lee Chia Wei, 29, a teacher at Maris Stella High, brought students to pay tribute to the late Mr Lee. The intention of bringing the students to the Parliament House was to educate them on Mr Lee’s contribution to the country. Mr Alvin Lee hopes that that the next generation of Singaporeans learn from Mr Lee’s resilience, to carry on his legacy. Maris Stella High had already given a speech to its students about Mr Lee. (Photo: Marcus Tan) 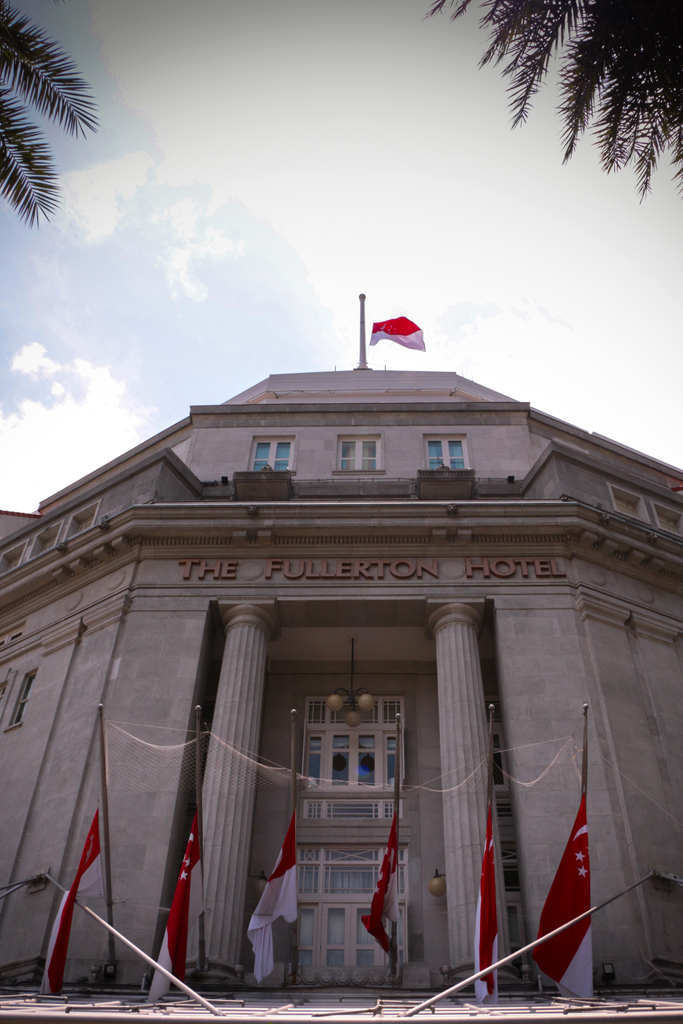 MARK OF RESPECT: Flags fly at half-mast as a mark of respect to the demise of Singapore’s founding father, as seen here at the iconic Fullerton Hotel. (Photo: Azmi Athni) 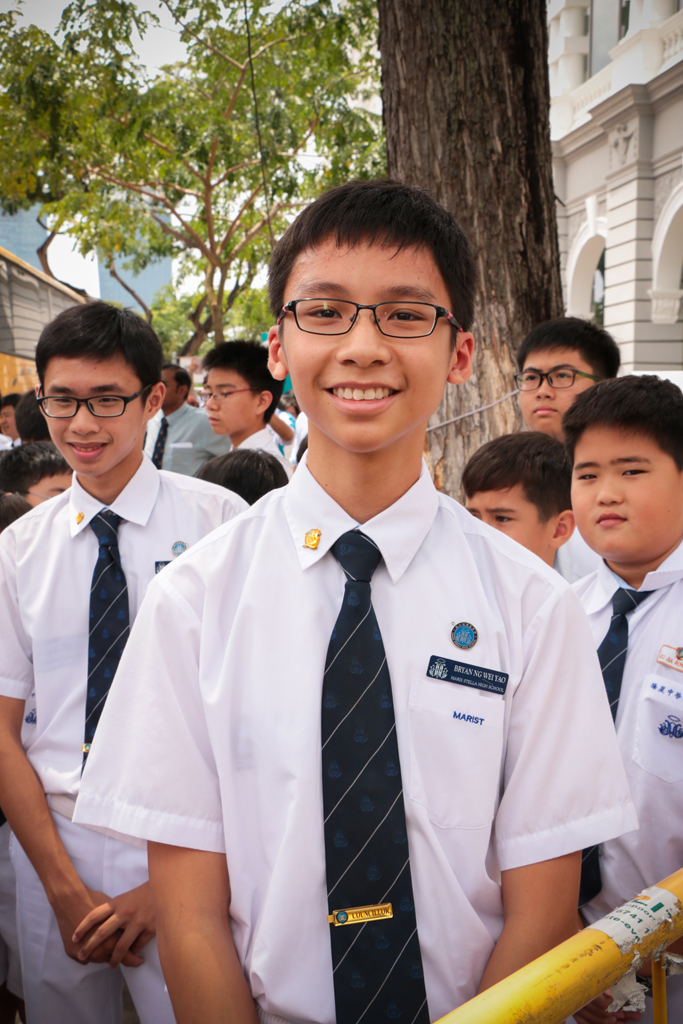 EDUCATED GENERATION: Bryan Ng Wei Yao, 15, a student at Maris Stella, says the next generation “should carry on Mr Lee’s legacy”. Maris Stella had played videos of Mr Lee’s political career to educate the students on Mr Lee’s contributions to Singapore, and his role in developing the education system. (Photo: Azmi Athni) 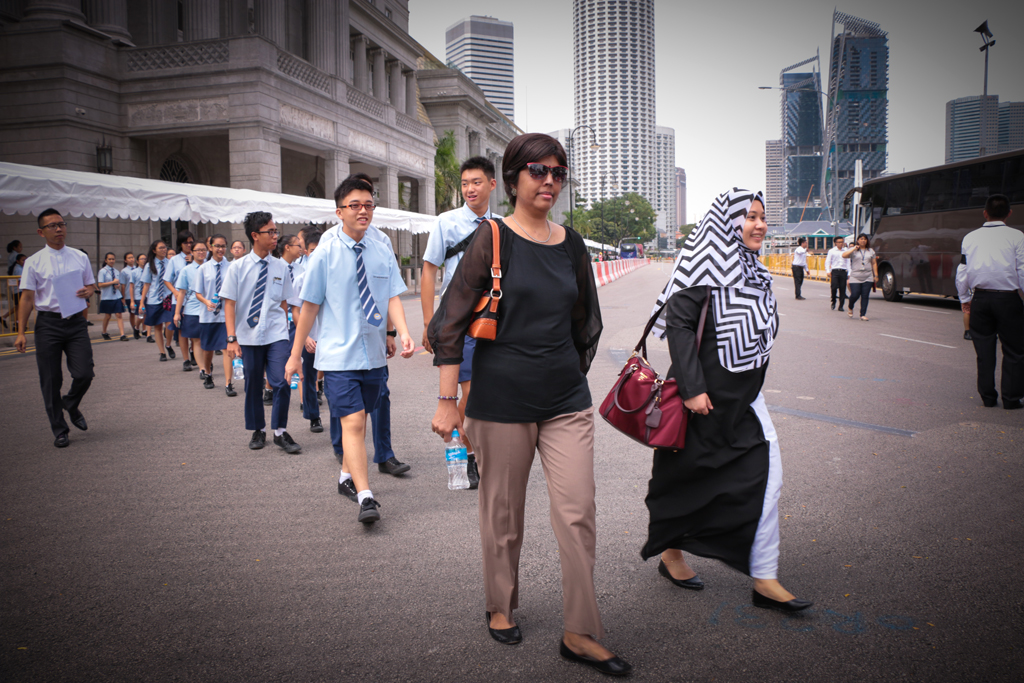 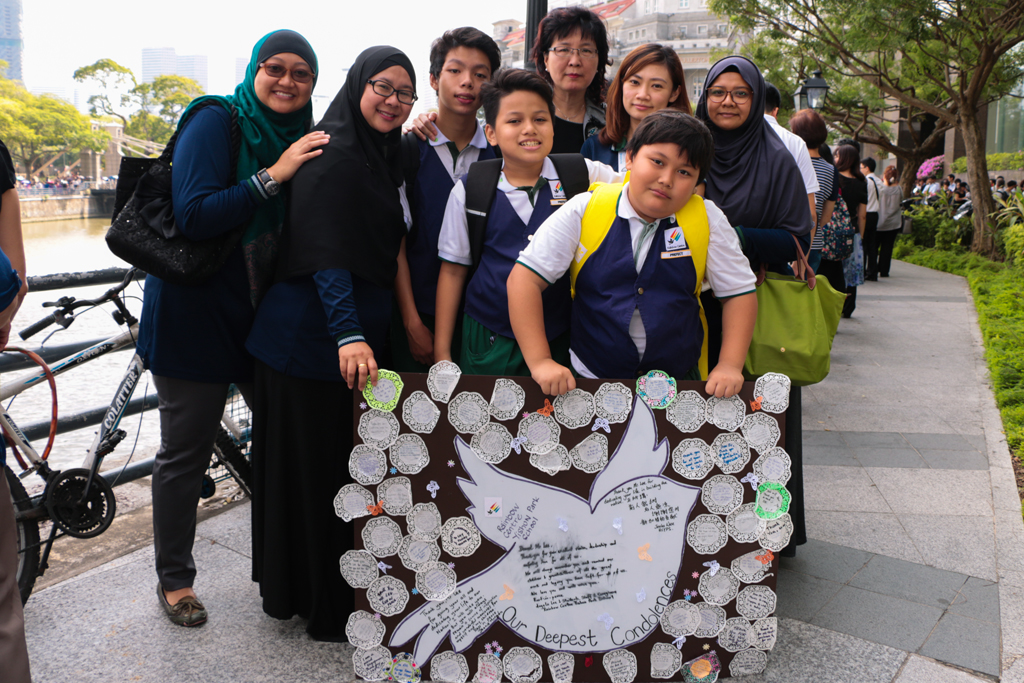 DAY OFF FOR SPECIAL REASON: Teachers and student representatives from Rainbow Centre Yishun Park School, a school for students with disabilities, took time off from their lessons to pay their tributes. They brought along with them a handmade card with all their messages written on it. Teacher Ms Syifaa Muhammad (second from left), 39, hopes that Singapore will remain as peaceful as it is now after Mr Lee’s passing. (Photo: Azmi Athni)