Building Beauty with a Heart 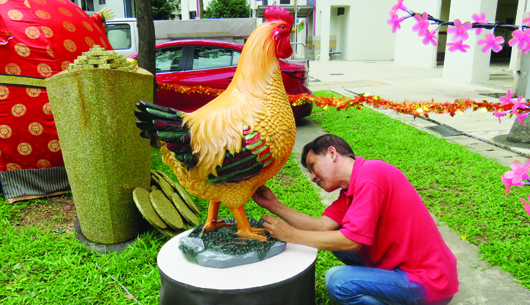 You know a festival or special occasion is near if you are around Woodlands Street 13 Block 179.

For the past decade, carpenter Tan Koon Tat has been decorating a corner of his neighbourhood every Chinese New Year, Hari Raya Puasa, Deepavali, Christmas and National Day.

This Chinese New Year was no different. To usher in the occasion, the 56-year-old has put up three 1.3m tall roosters. For Christmas last year, Mr Tan built a winter wonderland which included a homemade 2.2m snowman and snow machine.

A firm believer in racial harmony, Mr Tan hopes his decorations will give each race a chance to display their culture and at the same time, spread happiness and satisfaction to everyone.

“We should not only think of only our own race and festival but other races too,” he said. “Putting up works representing the festivals of all races in Singapore will make everyone happy, not just people of a particular race and that is how we can enjoy harmony.”

When asked how he is able to come up with different designs for each occasion, Mr Tan attributed it to his imagination.

“As a carpenter, creativity is important as it helps me to come up with the concepts for not just the snowman or upcoming Chinese New Year works, but also each and every work I do in my trade,” he said.

Residents have welcomed Mr Tan’s initiative and works in making the neighbourhood a better place for everyone.

Dr Jana Leong Skornickova, a researcher at Singapore Botanic Gardens and Mr Tan’s neighbour, said: “It is fantastic for Mr Tan to be able to come up with such beautiful works. I feel that the works are getting better with each year.”

Mr Michael Leong, 54, Mr Tan’s neighbour added: “Over the years, the interesting thing is that the residents here have expected him to come up with something for each occasion. Everyone is waiting in anticipation to see what he can come up with this coming Chinese New Year.”

Mr Tan foots the cost of the decorations and the electricity costs. The Christmas decorations cost about $2,000, for example.

But his works and effort were not appreciated by some. There have been incidents where people have damaged and removed his works.

Nonetheless, Mr Tan does not bear any resentment towards the vandals. “There are people who have damaged my works before but I have never scolded them or felt depressed. I do the works so as to bring happiness to others. If I scold them they won’t be happy and it would be pointless,” he said.