Everything clicked in film school 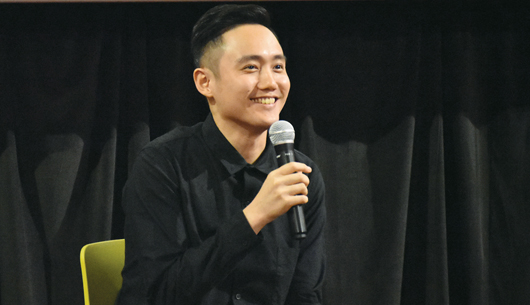 It is rare for teenagers to know exactly what they want to do with life but acclaimed director Boo Junfeng, 32, knew when he was 15. He wanted to tell stories through film and by 16, after his O-levels, was enrolled in the Film, Sound and Video school in Ngee Ann Polytechnic.

Boo begged his parents to agree to his plan and they did – on the grounds that he would get a degree after. “I fell in love with the idea of make-believe and story-telling. That was really why I wanted to do it. When I went to Ngee Ann, I actually looked forward to going school and I topped the class for the first time in my life. Everything just kind of clicked when I decided I wanted to do this,” said the soft-spoken filmmaker.

The National Youth Council (NYC) organised a screening of Boo’s latest film, Apprentice, at GV Plaza Singapura last Friday, Jul 29, in celebration of Youth Month. NYC encourages youth to realise their hopes and dreams, celebrate their resilience in Singapore, and participate in various activities to make a positive difference to Singapore in their own ways during this Youth Month. They arranged for Republican Post to have a sit-down interview with Boo.

The film premiered at the prestigious Cannes Film Festival in the Uncertain Regard section to critical acclaim from critics and filmgoers alike. The film explores the heavy topic of Singapore’s mandatory death penalty from the perspective of a young prison officer, Aiman, taking over the role of the chief executioner. The prison scenes are shrouded in deep, inky shadows, drawing viewers into psychological space of the gallows. The stripped-down visuals forces viewers to turn their attention to the protagonist’s impossible moral dilemmas, as he gets closer to an execution with each step.

As an artist, Boo says he holds strong views about the mandatory death penalty but he was careful not to tell his audience what to think. “People can come and leave with their original beliefs,” Boo said. “I didn’t make the film to provide answers, the film raises a lot of questions and I want people to take back with them some of these questions,” he said adding that he considers this an important value in storytelling.

The mandatory death penalty is a topic that is contentious and perhaps this is why the film got an M18 rating. Even though it restricted his audience, Boo said it was a big milestone for him to have such a topic dealt. “I think films and art have that function in society — to present an avenue for people to reflect and look at things that they have overlooked before or think about things that were deemed too much of a taboo before.”

“It doesn’t really matter whether you originally had a certain point of view for or against something, what’s important is that we all share a common humanity and it’s that humanity that a lot of these stories speak to. After seeing a story, you can start to look at it a bit differently because you’re experiencing it not just as a topic, you’re experiencing it as a human story,” he added.

When asked about advice he would offer to aspiring filmmakers, he urges them to be patient. “Personally, I feel that filmmaking requires a lot of life experience. That’s part of the reason I took five years to make Apprentice. I really wanted to experience life and understand things a little bit more, before I felt I was ready. It takes a lot of time, a lot of tenacity to be in filmmaking, so be patient.” To be patient also sounds like sound advice for those of us still figuring out what to do with our lives.