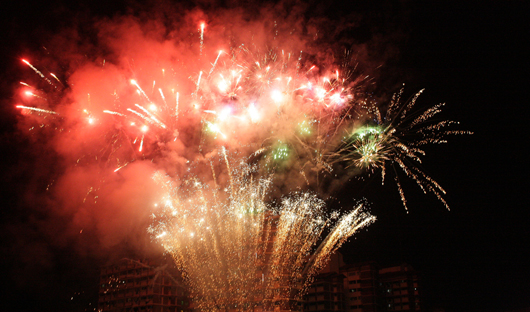 Singaporeans from all walks of life tend to head to the place to be on New Year’s Eve: Marina Bay.

But increasingly, residents find that they don’t need to go far because a great countdown celebration is right at their doorstep. Take Hougang Community Club for instance. Last year, it organised its first ever New Year countdown at an open field alongside Hougang Mall on Dec 31.

Festivities began at 6pm and residents were entertained by a mixture of Bollywood and English songs alongside hip hop and Bharathanattiyam performances put up by the residents themselves. To cater to the different segments in the audience, the show was also hosted in Chinese along with Chinese songs being sung by local artistes. Unlike in the usual CC shows, this countdown even had a belly dance performance.

One of the main highlights of this event was the human book of records where each resident was called upon to create a ‘2016’ formation using either a white or a red light in the open field. Each participating resident received a certificate and goodie bag in return.

And just like the wonderful fireworks at Marina Bay, a splendid firework set went off when the clock struck 12 – to usher in the New Year. Mr Lee Hong Chuang, 45, advisor to Hougang Grassroots Organisations said: “We only got the approval for the fireworks just two days ago, and I am as excited as the residents because this is the first time ever.”

Madam Nur Mazlinda, 48, a resident said she avoided heading to Marina Bay this time round: “It is just too crowded. Because I got three kids, travelling there and back is very difficult.”

RC chairman, Mr Muhammad Faruk, 48, said: “We are doing these for those who cannot go there so they can enjoy the countdown like everyone else.”