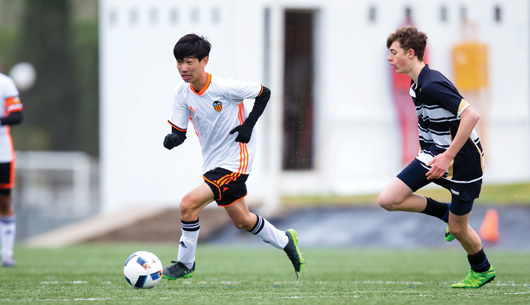 Standing at 1.68m tall and weighing a mere 50kg, Joel Chew Joon Herng is often one of the smallest players on his football team. But the 18-year-old has learned to beat his opponents through speed, technical skills and agility.

The central midfielder caught everyone’s attention last year when he won The New Paper Dollah Kassim Award. It honours the most deserving National Football Academy (NFA) player for his footballing excellence and character. The winner walks away with a trophy and a training stint at a European club.

The award has given Joel confidence to pursue a football career, especially since he fractured his collarbone in 2015 during a training session where he fell awkwardly on the ground. The injury meant Joel had to spend eight weeks on the sidelines. “All I focused on was getting back to playing football again and the injury did make me want to push even more to get back to full fitness,” he said.

Joel trains almost every day and takes only a day off to rest. As a student athlete in Republic Polytechnic (RP), Joel finds balancing school and football manageable. The Sports and Leisure Management student is a firm believer of the phrase ‘work hard, play hard’ and completes his work before going for training.

Even in his free time, the ball is always on Joel’s feet. “I’ll go for training slightly earlier to work on my technique,” he said.

Joel also credits his success to his parents’ support as they make it a point to watch his games, even if some are held overseas.

Joel was first introduced to football as his child when his parents took him to one of his father’s recreational games on Sunday. At these games, he would often engage in casual warm-ups with the “substitute uncles” outside of the pitch, sometimes even with his mother.

His parents then enrolled him into a football academy to play for fun when he was seven. He continued to play football in the Singapore Sports School, which earned him a place in the NFA team.

His parents, Madam Celine Tan, 48, and Mr James Chew, 49, are extremely proud of his achievements. They often tell him to “remember his roots” and to “always stay humble”.

After winning the Dollah Kassim Award, Joel aims to live up to his coaches’ expectations and hopes to take his football career overseas and play in the big leagues. “The team I dream to play for is Manchester United,” he said.