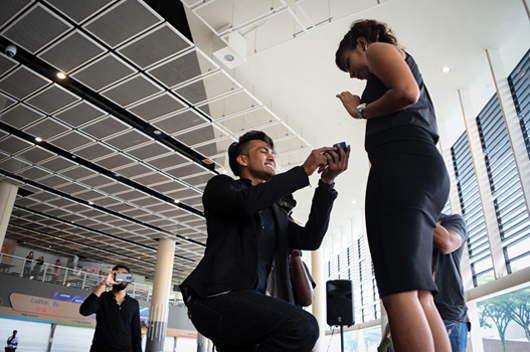 Fast forward to a sweltering Sunday on November 8 and Mr Shivabala, 24, was down on bended knee asking Ms Vinitha, 24, to marry him.

“I have been planning this proposal for months now. I knew I wanted to propose in RP so I roped in my friends from the Indian Cultural Group to help me plan and execute it,’’ said Mr Shivabala who graduated from RP five years ago with a Diploma in Communication and Information Design (DCID).

And what a show it was. His friends started the process with a Bollywood-inspired dance and they then re-enacted the couple’s memorable moments in school. The whole set-up took three hours to get going: there were cameras, videos, music and even a red carpet.

And because they met in the first year during their first semester, he even called down his former lecturer during that year, Ms Chan Yen Ting, to be in the re-enactment as well.

“We were lucky that our Director of CEC, Mr Warren Wang, fully supported this request, which started the ball rolling actually. We were also very grateful to have the support of OSG (Office of the Student and Graduate Affairs). Without them, this would not have happened too,” said Ms Chan. “After all, how many couples can meet, fall in love, and propose (and be proposed) in the same place? There’s got to be something special about RP.”

When Ms Vinitha arrived, the couple took a nostalgic tour of the places that held special memories for them – from E3 to Nanyang Café before they finally ended up at South canteen – where they hung out the most after class. It was here that Mr Shivabala uttered that question every girl dreams of: “Will you marry me?’’
“I’ll have to think about it,” Ms Vinitha teased. It was Mr Shivabala who got emotional at the end of it all.

What makes them tick? “I love that she challenges me. I would say that our relationship is quite playful,’’ said Mr Shivabala, who is about to pursue his degree.
For Ms Vinitha, it is being able to find a partner who accepts her warts and all. “It’s difficult to find a friend in a partner. I can speak to him about anything and everything, and I know he wouldn’t judge me,” said Ms Vinitha, who is about to finish her degree at Edith Cowan University.

In a year’s time, the couple will proceed to Registry of Marriages, where they will make the marriage official.

Ms Vinitha said she did not know the proposal would be in RP, even though she “secretly wished” for it to take place there. “The proposal was really sweet,” she said. “Nothing could have been better than going through the iconic moments of how we started off. Those memories will always be special.”

Mr Shivabala added: “RP has given us so many wonderful memories, so it will always have a special place in our hearts.”