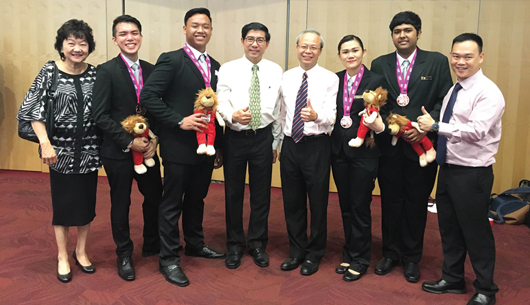 It was similar to a scene from the cooking reality show Masterchef – Muhammad Danial Suboh was given a mystery box of ingredients and tasked to prepare a three course meal at the WorldSkills Singapore competition.

The next day, the second-year Culinary Operations student at RP had to cook a four-course-meal based on the recipes he had planned prior to the competition.

Danial’s cooking wowed the judges as he took home the gold medal in the cooking category at WorldSkills Singapore. Some 150 youth competed in 17 skill areas, including web design, visual merchandising and aircraft maintenance, at the three-day nationwide competition. The top medallists will represent Singapore at the world finals – dubbed the Youth Olympics of Skills – in Abu Dhabi next year.

For Danial, the months of preparations in the kitchen paid off. “It is either after school, during the holidays or weekends that we prepare and practice for this competition,” he said. “We go to the kitchen to practice different kinds of meat as we do not know what will be given and to write down recipes for submission.”

For others, preparations for the competition started a year ago. The RP students consulted lecturers and did their independent studies by coming back during term breaks and practicing past year papers.

Dr. Marcelo H. Ang JR. chief expert and judge for Mobile Robotics, said the level of competition has been raised this year. “They all did a great job this year and I would have to say that it was a tough fight,” he said. “Many work were impressive and creative. During judging, some even when passed our expectations and I believe this is a skill area that Singapore is improving on over the years.”