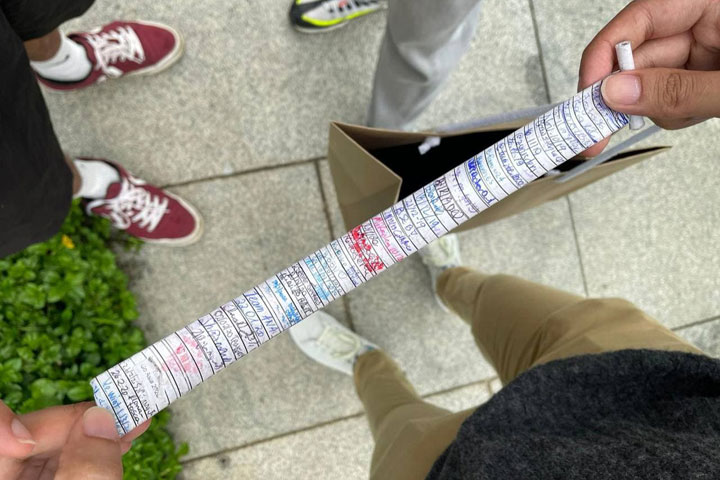 Aqeel Sidek spends hours on end hunting for hidden caches that he can add his own name to. (Photo: Aqeel Sidek)

Aqeel Sidek spends hours on end hunting for hidden caches that he can add his own name to. (Photo: Aqeel Sidek)

After COVID-19 restricted most typical social gatherings such as going to the cinema or out for dinner, many youths turned to other means of socialising outside of their homes. Aqeel Sidek is one youth who decided to take up the challenge of geocaching.

Aqeel Sidek, 20, being a third-year Sports and Exercise Science student, has always had an inclination towards adventurous activities that can keep one fit. It was during COVID-19 that he discovered the excitement that comes from discovering hidden caches all over Singapore, and he believes others should try it too.

Geocaching is essentially a treasure hunting game where individuals search specific locations for small hidden caches. It can be easily done in Singapore by accessing the online geocaching community through the geocaching website, and simply looking up the location of caches that other users have logged.

Although there is no monetary value expected to be involved in finding each cache, some geocachers have been known to leave a coin or a note in the cache for the next person that comes across it, who can then decide to pay it forward by leaving a small token of their own.

Aqeel mentions that while specific coordinates of a cache are given, it is still difficult to pinpoint exactly where it is due to their small size and how expertly hidden they are. However, it doesn’t make it impossible as each cache location usually comes with a riddle that hints to where it is hidden.

These hints come in various forms, such as numbers or jumbled up words. For example, the original owner of the cache may leave the hint of the number ‘’8’’ within the online cache description. This could mean that the cache is hidden near a sign that has the number ‘’8’’.

Once a cache is found, geocachers will typically open it up to write their names and the date on the piece of paper found inside, as well as snap a picture of the cache to log their achievement on the geocaching platform. In fact, Aqeel considers these photos as clues in finding the same cache himself. ‘’It gives you a small hint on where that person was standing and it may give off some clues on the cache’s location if you look at the surroundings of the photo,’’ he said.

Also, Aqeel suggests using the geocaching platform to check the latest activity of the cache showing that other geocachers have visited it recently. This is to ensure that you would not spend hours searching for a cache that is no longer there.

Most importantly, Aqeel believes in thinking outside of the box. Since these caches have to be hidden in a way that passerbys wouldn’t spot them, you may have to go to great lengths to find them, such as using your phone’s camera to look into tiny gaps.

Recalling his first geocaching experience looking for a cache on the side of a road, Aqeel says: ‘’You end up looking very weird. Imagine the motorists on the side just looking at two people digging through grass and vegetation all day.’’ Unfortunately, their search came up empty.

However, this did not deter Aqeel and his friend, as they ventured on to their next stop, which was riddled as: ‘’It’s in a tight, tight space’’. Initially, they thought they had solved the riddle and assumed the cache must have been under the stairwell of the overhead bridge, going to the lengths of crawling in the dark, cramped space under the staircase.

Eventually, they realised that the cache was actually wedged within one of the metal barriers on the side of the road. Despite that, they didn’t stop there. ‘’That satisfaction when you find something really motivates you to push on and try to find more,’’ Aqeel remarked. ‘’So that’s what we did after that, we just managed to find others along the way.’’

Typically, caches are hidden within vegetation or in the crevices of fences and concrete. However, geocachers often find themselves stumped by unique hiding positions. One unusual hiding spot that Aqeel came across was in a street lamp post. When he removed the false electrical cover, a small plastic zip bag containing the log fell out.

While caches come in a variety of sizes, they are meant to be small in order to be hidden well. However, many would be surprised to find out how tiny caches can be. Aqeel revealed that the smallest cache he had ever found was a 3cm-long magnetic capsule which had the piece of log paper tightly rolled up inside. He felt a sense of triumph after finding this miniature cache, saying: ‘’You’re searching high and low and when you find something so small, you feel so satisfied and you’re like ‘Okay good, I finally did it’.’’

Besides the challenge of searching for tiny caches, geocachers often face the difficult task of trying not to appear suspicious. While searching for a cache that was located in front of someone’s house, ‘’I had to avoid looking suspicious while digging through the drain,’’ Aqeel laughed. ‘’Although you may be thick-skinned and don’t really care what people think, it matters in the case of trespassing, or caught with suspicious activity, anything that may lead the police to call on you.’’

While most of Aqeel’s geocaching adventures have been filled with excitement, there have been times that he started to feel disheartened. ‘’All five of us were looking high and low in the possible areas that were indicated about the cache,’’ he explained. ‘’We all thought it might have fallen from the bridge or someone might have taken it.’’

However, with the support of his peers, Aqeel persisted and dug his hands into the gaps of the bridge, where he eventually felt the piece of velcro that held the cache to the bridge.

Aqeel insists that geocaching is best done with peers, as they can help ensure that you do not get demoralised easily. ‘’You’ll have the motivation to carry on and explore more,’’ he says.

If you happen to see someone foraging through bushes or squeezing under stairwells, do not be alarmed. It is likely just a geocacher like Aqeel trying to find their next treasure.