The man behind Geylang Adventures 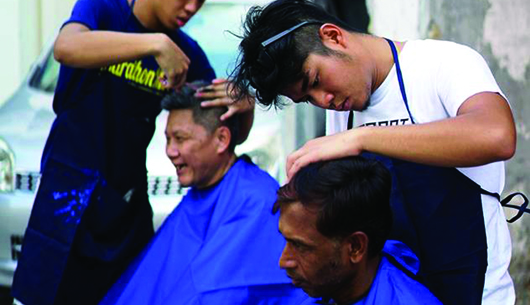 Ask anyone which neighbourhood in Singapore they think is the most notorious and Geylang should feature prominently. The area is known for the sex trade and the sale of contraband items.

Mr Cai Yinzhou is offering a different perspectives. In 2013, he founded local community group Geylang Adventures with a group of friends and set out to combat negative stereotypes about the neighbourhood. Now, it has about 20 volunteers who befriends and supports migrant workers.

Growing up in Geylang, Mr Cai used to have sex workers as his neighbours. While he was “very intrigued by their lives”, living among different groups of people had helped to raise his social consciousness.

“I learnt not to judge them too quickly and to try to listen to them,” said the 27-year-old. “After seeing all sorts of characters in the neighbourhood, I think it is important to accept people for who they are and learn to help them in different ways.”

Back Alley Barbers is one of the initiatives that Mr Cai’s group started, where migrant workers are offered free haircuts in the back alleys of Geylang. The initiative started three years ago when Mr Cai was playing badminton with a group of workers and he noticed that some of them had long hair. After much probing, he discovered that the foreign workers were saving money on cutting their hair so that they could send more of their salary back home.

He learnt the trade for six months before starting Back Alley Barbers. Naturally, the four workers Mr Cai offered his services were apprehensive. “They were like, ‘Eh, sure or not?’ I said, ‘I cut my own hair. Nice? Cut the same hairstyle, can?’ So I saved them that bit of money,” recalled Mr Cai. Today, the group has 16 barbers and will be holding the next session in March.

The group’s other initiatives include Migrant Mail and Majulah Belanja. In Migrant Mail, volunteers collect handwritten letters from migrant workers and take Polaroid pictures to send them to the workers’ hometowns. Majulah Belanja is a cooking competition between locals and migrant workers, aimed at promoting greater understanding of other cultures. Mr Cai also leads a trail around Geylang for $35 per person.

Recently, Mr Cai founded another similar group, Dakota Adventures, where participants are brought on a trail around Dakota Crescent, an estate that has been slated for redevelopment by the authorities.

For youths keen on making a change in the community they live in, Mr Cai suggested they should get their hands dirty.

“For Dakota, when I need inspiration, I’ll just go down to the estate, sit down at the void deck and just talk to people who come by, and it gives me inspiration,” said Mr Cai. “So they can do that as well, for students who have interest in the issues but don’t really know how to start – just spend time with the people on the ground.”

When asked for the one piece of advice he would give, he replied: “I encourage youths to be hungrier, to look for change, to be a little bit more curious about things that are happening around them. To frame their lives by the number of days that they live by, and define their legacy by that – not by how many followers they have on Instagram.”