The woman who overcame all odds 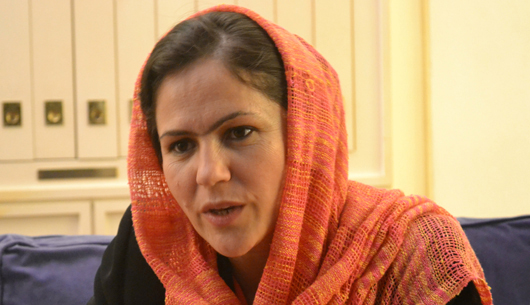 In her 38 years of life, Fawzia Koofi has escaped death twice, fought for the right to go to school and lost her family members to the Taliban. But instead of running away, Ms Koofi remained in her country and next year, she could become Afghanistan’s first ever female president.

The human rights advocate and Afghanistan’s first female member of Parliament was in Singapore on September 28 to share her remarkable tale of resilience in a country long associated with violence and oppression. Talking to a rapt crowd of 113 at the Arts House, Afghanistan’s first female presidential candidate traced the significant events of her life, which she has penned in a memoir called The Favored Daughter.

Throughout the two-hour session, part of a series of talks that allow critically acclaimed authors to discuss their works and interact with local readers, Ms Koofi’s passion was most evident when discussing women and education.

“You can’t kill a nation by killing individuals, but you can by stopping education,” she said to the audience. Ms Koofi herself was the first daughter in her family to go to school, after much bargaining with her parents. She now helps to build schools, ensuring girls have the same opportunity she did.

This desire to see change in her country compelled her to join politics in 2005. She recounted the incident that started it all: “It was the time that the Taliban put my husband in jail and they were misbehaving with me and other women. That was the time I felt the discrimination and I wanted to change things for other women”. Now, Ms Koofi holds the position of deputy speaker of Parliament, another first for a woman in Afghanistan.
Related Story

Ms Koofi sits for a chat with The Republican Post.

The job comes with a huge price though – her life being in constant danger. In 2010 she survived an assassination attempt while in a car with her sister and daughters. As bullets were fired ceaselessly, Ms Koofi crept under her seat and shielded her daughters while her bodyguards retaliated with gunfire for 30 minutes.  Even now, she wakes up to threatening letters daily, warning her that there are suicide bombers ready to kill her anytime.  “It feels sad knowing that there are 30 people who would kill themselves in order to kill me,” she said nonchalantly.

Not that Ms Koofi is a stranger to near-death experiences. When she was an infant, her mother left her out in the sun to die as the father had wanted a boy. Though her mother changed her mind the following day, her life still continued to be racked with drama. Four of her brothers were killed by the Taliban while her husband passed away after being imprisoned by the group.

Despite the challenges thrown her way, Ms Koofi still perseveres and finds reasons to go on and even change her environment. She said: “The phone calls from my people asking for favours motivate me to make changes to their lives.”

If she wins the presidency next year, the mother of two girls wants to immediately help the two groups of people she is always fighting for. “There was going to be an upcoming law that prevents child and multiple marriages, and the abuse of women. However, it is put on hold right now. The first thing I would do is to pass this law. Then, I would go on to create jobs for women and give them access to economic resources.”